The real story of NORFED started back in 1955, when leaders of the Huddersfield Branch suggested that there might be a closer affiliation between Club Branches in the North West-North East and Yorkshire BSAC Branches, apart from the joint expeditions that were taking place. One good point would be that the “Northern Branches” might hold an annual dinner which could be organised for the benefit of those Northern Branch members who now find it difficult as well as impractical and expensive to keep going to London.

So, on dull overcast day 45 divers from Northern branches got together and met at Devils Bridge, Kirkby Lonsdale for the largest “Underwater Meet” free-diving meeting ever held in the North of England. In the Devil’s Pool, the visibility was surprisingly very good, and they swam up river over fresh water ells and through shoals of trout to the base of the rapids. Some of the branches represented were; Merseyside-Blackpool-Leeds-Sunderland-Huddersfield were all in the party.

Whitsun in the North
More than 65 members from 8 Northern Branch clubs met at Trearddur Bay Anglesey for a joint meet. Most of the organisation was done by Vernon Peake secretary of East Lancs Branch. Alan Broadhurst Chief Diving Officer was present.
Branches Present were:
Blackpool-Bradford-East Lancs-Harrogate-Huddersfield-Merseyside and North Staffs.
(Reported in Triton Magazine July-August)

These were the chief items on the agenda when delegates from 10 Branches in the North of England met in Bradford for the second annual meeting of the Northern Region of Branches. Alan Broadhurst Club Diving Officer Chaired the meeting.

Delegates unanimously agreed to continue the joint diving projects initiated on Anglesey in 1957 and will be called “Windive”  and it was decided to be more ambitious this year starting with an Easter dive and another “Windive” but this time on the East Coast and with a third in the Autumn in the Lake District and to be combined with a Northern Region dinner/dance.

Other subjects discussed were Foreign Holidays, air supplies, transport and inter club co-operation. To heap paperwork and committee work to a wieldy minimum organisation of the Regions activities is now in the hands of two liaison officers, Herbert Fendley, Chairman of Hull Branch and Richard Wharldall of Teesside Branches. They have both done valuable work to keep the Regions thriving and their expenses to be defrayed by an annual subscription of £1.00 from each Member Branch.
(Reported in Triton Magazine May-June edition)

Have you got any information or photographs relating to the history of NORFED?
Please get in touch with us today. 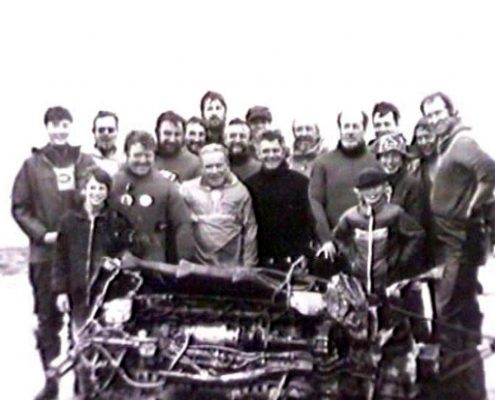